American brothers and businessmen identified as victims of latest BC avalanche

Two American businessmen have been killed in an avalanche in British Columbia, lifting the deadly season’s toll to five, as forecasters warn of large and dangerous slides occurring without the usual signs of danger.

Pennsylvania−based Kinsley Construction announced on its website on Tuesday that brothers Jonathan and Timothy Kinsley were killed while on a skiing trip in British Columbia, leaving the company "deeply heartbroken."

RCMP said earlier that two heli−skiers had died Monday near Mount McCrae southeast of Revelstoke, in backcountry near an area known as "Chocolate Bunnies."

Heli−skiing operator CMH Nomads said in a statement on Tuesday that two guests and a guide were caughtin the avalanche.

CMH president Rob Rohn said both guests were fully buried and were located by their transceivers.

Both were unresponsive when they were pulled from the snow and were later pronounced dead in hospital, he said.

The guide was transferred by ambulance to Kelowna General Hospital.

Kinsley Construction, based in York, Pa., said the Kinsley brothers would be "immensely missed."

"Our entire Kinsley family is still processing this heartbreaking news of their deaths," said the statement, which identified Jonathan Kinsley as an executive of Kinsley Enterprises and Timothy Kinsley as president of Kinsley Properties.

The latest deaths come just days after a snowmobiler died after being caught in a slide south of Valemount, B.C. Two Nelson Police Service officers were buried by snow Jan. 9 while skiing near Kaslo, B.C.

Const. Wade Tittemore, 43, died in the slide, while his co−worker, Const. Mathieu Nolet, died from his injuries days later in hospital.

Rohn said in the statement that the thousands of guests who ski with them each winter are like family.

"It is impossible to put into words the sorrow that we feel and the sadness that is shared by our guests, their families and all of our staff."

An investigation into the latest deaths is being co−ordinated by the B.C. coroner and the RCMP.

B.C. Emergency Health Services said Tuesday it was called following a separate avalanche near Cherryville east of Vernon, B.C., on Monday where one person was taken to hospital.

Experts have warned that this season’s snowpack across much of the province is particularly unstable with a weak layer of snow crystals near the bottom that was buried in late November. 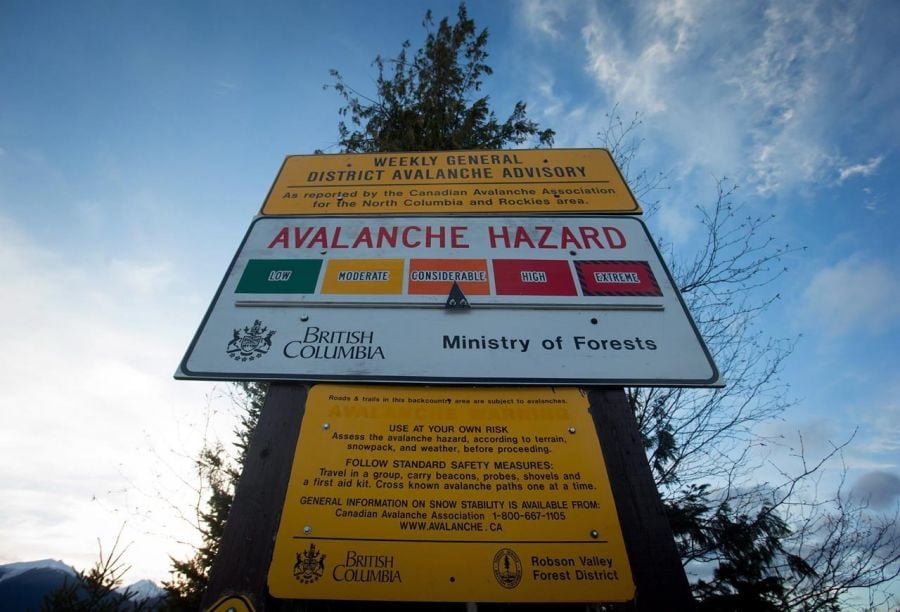 Sarah Taylor with Avalanche Canada said in a statement on Tuesday that it’s important to know that a "dangerous snowpack structure" exists in the B.C. Interior that can produce large, human−triggered avalanches.

"We urge backcountry users to exercise caution and make conservative, low−consequence choices if they decide to travel in avalanche terrain," she said.

Taylor said backcountry users should always check the avalanche forecast, have essential rescue gear and the training to use it.

Avalanche Canada forecast supervisor Ryan Buhler said in a news release issued by the B.C. government that the snowpack was "highly unusual and unpredictable."

"The complication with this snowpack setup is that the layers are deep enough that we are less likely to see clues of instability, like nearby avalanche activity, ‘whumpfing’ or cracking snow,” Buhler said.

“However, despite the lack of obvious clues, there is serious potential for large, human−triggered avalanches. We urge backcountry users to exercise caution and make conservative, low−consequence choices if they decide to travel in avalanche terrain."

The statement says that in the past 10 years, about three−quarters of all Canadian avalanche fatalities occurred in B.C.

Avalanche Canada has said the dangerous conditions this year are similar to those of 2003, when 29 people died in avalanches in Western Canada.