The mother of two young Quebec girls found dead following an Amber Alert last week delivered a tearful tribute to her "princesses of love" Monday as police continued to hunt for their father, who is suspected of abducting them.

Amelie Lemieux, the mother of Norah and Romy Carpentier, sobbed as she made her way to a makeshift memorial at Chutes de la Chaudiere park in Levis, Que., accompanied by a few dozen members of her family.

After inspecting the gazebo that has become filled with stuffed animals, flowers and notes since her daughters’ bodies were found Saturday, she thanked authorities and the public for their support.

"My two beautiful princesses of love. I wanted and waited for you so much. From your very first breath, I loved you unconditionally. You are my entire life, my reason to exist," she said through tears.

"Be my stars in the night who will guide my steps across this immeasurable pain. I love you madly. I love you to infinity." 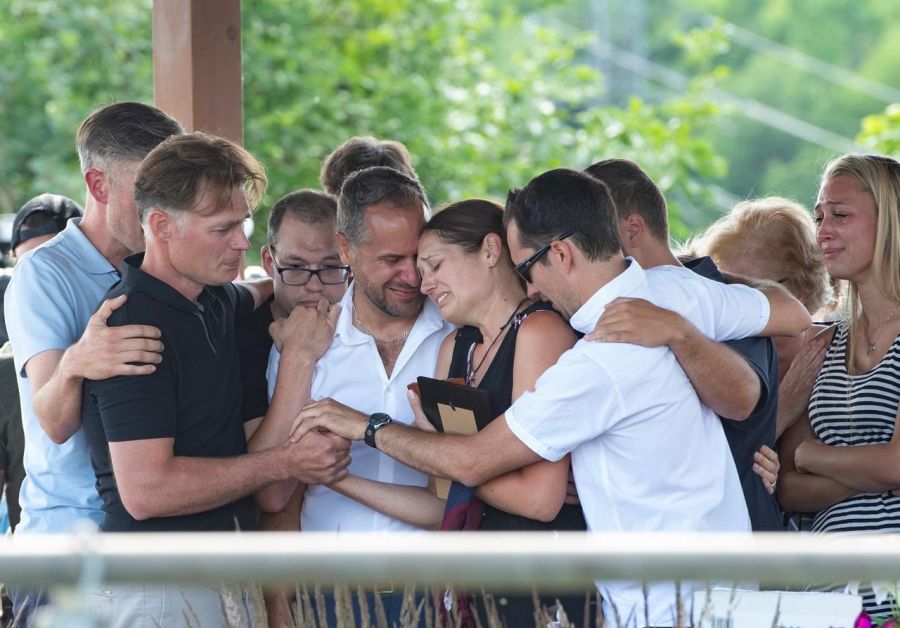 Quebec provincial police continued their intensive search Monday for Martin Carpentier near the wooded area in St−Apollinaire, Que., southwest of Quebec City, where the bodies of Norah, 11, and Romy, 6, were discovered.

Provincial police said they found "pertinent elements" in the area on Sunday. Late Monday, police said those items were sent to a laboratory for analysis to see if they are linked to Carpentier.

"The elements that we possess lead us to think Martin Carpentier could still be around the area, or at least be in transit in that area," said Sgt. Ann Mathieu, a Quebec provincial police spokeswoman.

Police did not specify what the items were, but as the search spanned a fifth day, police raised the possibility Carpentier could be unconscious or dead, given the weather conditions and the possibility he was injured in a car crash right before his disappearance.

"We can’t rule out the fact that he could be dead," Mathieu said. "But also, he’s a suspect in our case, so it’s important for us to find Martin Carpentier, because the key to this event is Martin Carpentier."

Mathieu said autopsies on the two girls have been completed, but police won’t release details until Carpentier is found.

Police deployed a helicopter, a drone and police dogs in the search.

The girls were last seen Wednesday and became the subject of an Amber Alert the next day. Police have said they and their father are believed to have been in a serious traffic accident on Highway 20 in St−Apollinaire on Wednesday evening at about 9:30 p.m.

Investigators said the car was heading east when it skidded into the median, flipped over and landed on the shoulder on the opposite side of the highway. But police did not find any occupants inside the car when they arrived.

On Sunday, the manhunt for the 44−year−old Carpentier had authorities tightening the search in a thickly wooded area near where the young sisters from Levis, Que., were found.

Residents had helped with the searches until Saturday, but police asked people to stay away from the area Sunday to let officers work.

The case has gripped the attention of the province, especially in the town of just over 6,000 people where it’s playing out and in the family’s hometown of Levis, across the St. Lawrence River from the provincial capital.

The oldest of the sisters, Norah, was a member of a local chapter of the Association de Scouts du Canada — which primarily serves the French−speaking scouting community across the country.

Dominique Moncalis, a spokeswoman for the Association de Scouts du Canada, said Martin Carpentier had been a leader with the 128th Groupe Scout de Charny since last September.

It was a brief role, cut short when the COVID−19 pandemic forced the suspension of all activities in mid−March.

The memorial the family visited Monday was started by two scout leaders over the weekend, and vigils for Romy and Norah were held there Saturday night and again Sunday morning.

Quebec Premier Francois Legault began a Montreal news conference on Monday by offering condolences to the family of the young victims.

"I’m shocked, and I believe all Quebecers are shocked like me," Legault said, adding police will do everything they can to find the father.

Legault also urged anyone who sees family members in difficulty or distress to get help, giving out a number for a parent help line.

"If you have trouble, if you don’t feel (in) control or if you see somebody close to you not being in control, having difficulties, you don’t need to be shy," he said.

"You have to do something when you see that you’re in trouble before doing something terrible."