The federal Liberals’ first budget of their minority mandate will put a heavy focus on the environment, which Finance Minister Bill Morneau says should get the opposition support he needs for the budget to pass.

Consultations kicked off Monday on the financial blueprint that is to be released by spring.

Speaking to a group of students at Ryerson University, Morneau added that health care and safety issues, such as gun control, are also themes in his spending plan. 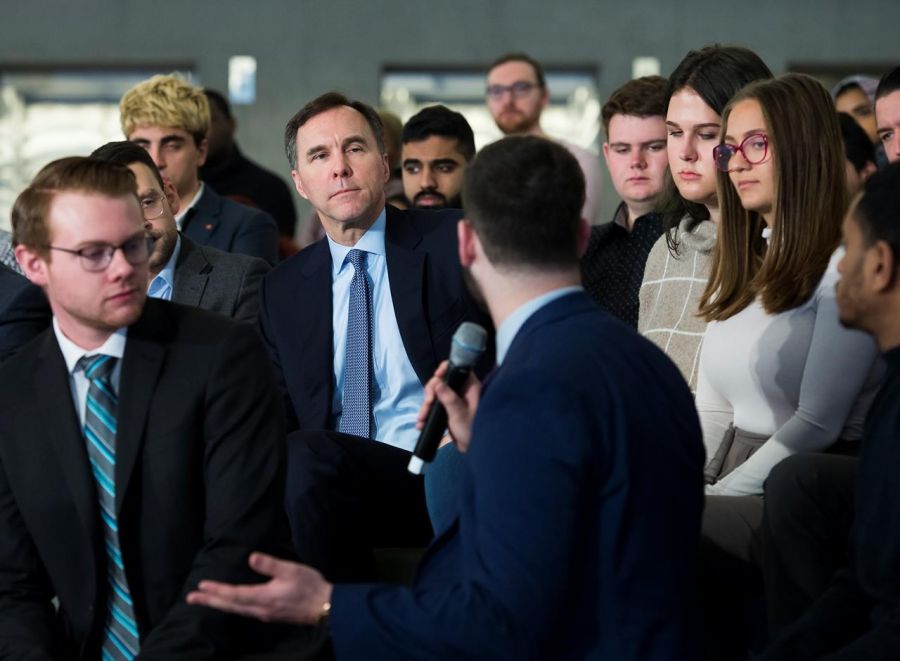 But it was the environment that he returned to in his town−hall meeting, saying a strong majority of Canadians showed in October’s election that the issue was important to them.

"We think that we have a mandate, together with other parties, in government to move forward on issues around environment and climate change," he said.

Morneau said the Liberals would consult opposition parties and work with those that want to work with the government on issues related to the environment, and reconciliation with Indigenous Peoples.

The Liberals will need the help of opposition parties to pass the budget, since the government lost its majority in the House of Commons in the 2019 federal election.

If the budget fails a vote in the House of Commons, the government could fall and trigger another general election, but Morneau seemed optimistic about his upcoming budget’s chances of gaining parliamentary approval.

"If it turns out that one or a collection of parties don’t support us as we go about that, well, then we’ll have to face that reality and ask Canadians what they want us to do, but I’m hopeful that won’t happen in the near term," Morneau said in response to a question.

🔴 #LIVE NOW! Join us for a discussion on the launch of this year’s pre-budget consultations: https://t.co/1Jv0vX5VJ8 #YourBudget pic.twitter.com/Zba6YvAaDX

The federal books are projected to show a deficit this fiscal year of $26.6 billion — $6.8 billion deeper than originally planned. Next year’s deficit is expected to reach $28.1 billion, and that’s before accounting for the Liberals’ election promises.

The Finance Department’s fiscal update last month said the deeper deficit is largely driven by changes to how employee pensions and benefits are calculated — a hit that grows when interest rates are low, but could drop sharply if interest rates rise.

Experts and the parliamentary budget officer have suggested the government’s fiscal wiggle room has narrowed considerably, and will tighten more if the economy slows down.

Morneau said his budget will take into account issues beyond Canada’s borders, like trade wars that can send ripples through the domestic economy.

"We need to make sure that we maintain that strong balance sheet, that we maintain our strong fiscal position so we can do deal with the potential for issues that we can’t necessarily predict up front," he said.