(UPDATE: Nov. 29 @ 9:45 am) - Flood warnings are posted for a section of British Columbia’s southern Interior and flood watches or high water advisories cover large parts of the province, as it deals with the consequences of a second major rainstorm in as many weeks and braces for a third.

Environment Canada says more than 100 millimetres of rain drenched the Fraser Valley city of Abbotsford over the weekend, while more fell in Hope and another 100 mm could fall once the third storm arrives tonight. 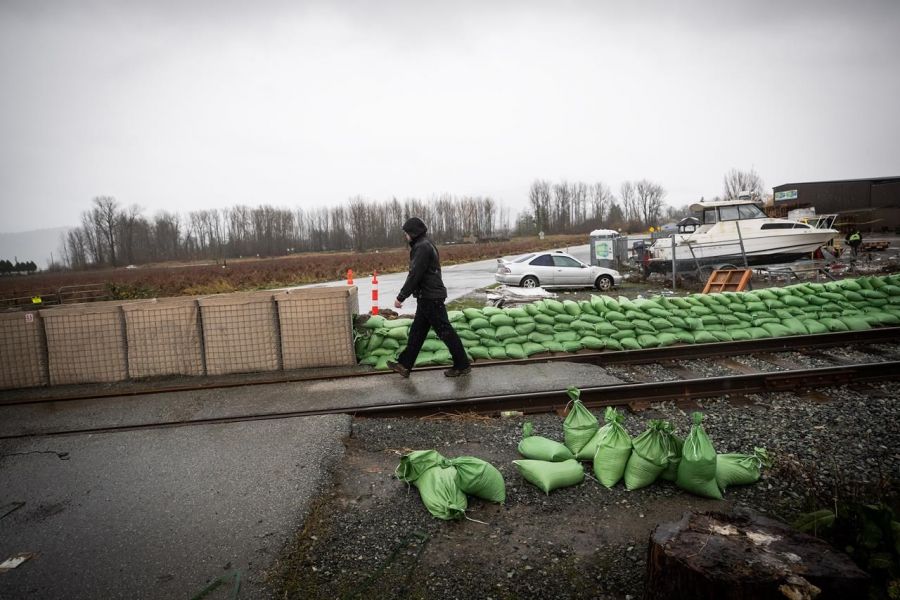 Flood warnings have been issued for the Coldwater, Coquihalla, Nicola and Tulameen rivers, which all caused serious flood damage earlier this month to cities and towns along their banks, including Merritt, Spences Bridge, Princeton and Hope.

A flood warning also remains in effect for the Sumas River through Abbotsford, where rising levels forced crews to set up a portable dam last night to protect a key stretch of Highway 1.

Abbotsford Mayor Henry Braun says the focus is on flooding of the Nooksack River in Washington state, because its high waters have the potential to further inundate low−lying Abbotsford areas.

A social media post by the City of Sumas in Washington says floodwaters from the river continue to move north toward Canada but had not yet reached a key bridge about half a kilometre from the border.

"When that happens we will use the flood siren once again," the post said Monday.

"At that time we will recommend everyone shelter in place. Most of the roads in and out of Sumas are already closed. Please do not panic. Make any necessary preparations now."

Braun said the flood zone is so saturated that more water from the Nooksack River would simply surge above ground "like a surfer."

"It’ll come here a lot faster than in the previous event," Braun said Sunday while providing an update on flood−management measures. Flooding has destroyed dairy and poultry farms as well as fruit and vegetable fields in one of B.C.’s prime agricultural areas.

A precautionary evacuation order was issued for another handful of Abbotsford properties late Sunday. Several more homes were also placed on evacuation alert after a mudslide threatened properties on a hillside north of Highway 1, away from the Sumas flooding

The second storm had subsided in many areas by early Monday. The River Forecast Centre said many rivers were receding, but it also said it would be ready to issue additional flood warnings if required.

The centre was maintaining a flood watch for the South Coast including the Sunshine Coast and Lower Mainland north to Pemberton and the entire length of Vancouver Island.

An additional atmospheric river is forecast to arrive to coastal British Columbia on Tuesday and may pose additional risk to flooding on the Central Coast and again on Vancouver Island, the centre said in a weekend advisory.

Public Safety Minister Mike Farnworth has said the province is prepared to use Alert Ready, a system that pushes emergency notifications directly to cellphones, if local authorities believe the next storm poses a threat to life or public safety.

(Original story: Nov. 29 @ 6:05 am) - Residents of another handful of properties in Abbotsford were ordered to evacuate late Sunday night while some others were placed on evacuation of alert due to the continuing flood threat.

Meanwhile, crews in the city, including members of the Canadian military, worked through the night to pump water into so called tiger dams that have been set up in a desperate effort to try to hold back floodwaters from the Sumas River.

The second in a trio of intense rainfalls subsided in many areas Sunday, however Environment Canada warned that associated warming had pushed freezing levels well above mountain tops. That means snowmelt is flowing into runoff, causing rivers to rise and increasing the risk of flooding.

The District of Hope declared a state of emergency yesterday while new evacuation orders were issued in parts of Abbotsford and west of Merritt.

A third storm in the series of devastating atmospheric rivers is forecast to arrive on Tuesday and Wednesday and officials have warned that it could be the worst one yet.

Public Safety Minister Mike Farnworth says the province is prepared to use Alert Ready, a system that pushes emergency notifications directly to cell phones, if local authorities believe the next storm poses a threat to life or public safety.